skip to main | skip to sidebar

This is a project that I made for Belgrade Comic Fest . The idea came after I made 20 illustrations for Victor Radonjic's poems , that can fit together to make one big illustration .
It's actually a paper band 7m long and 7cm thick. Drawings are done with mixture of graphite pens, air brush and white gouache. After that it is coiled on two sticks and put together in wooden box, with rewind buttons. As I like to say, this is a one picture comic (no vertical spaces between pictures) and you need to rewind it in order to read it. Hence the title "Premotavanje" - Rewinding. The story is about rewinding also, rewinding of the whole life through series of flash-back's.
This comic artifact is also adapted for "Stripoteka" comic magazine on four pages with five stripes each. I received Grand Prix at Belgrade comic salon 2012. for this, some would say, ready made or assemblage or installation. This video version is made to create the impression of watching real box and how it looks when you rotate the buttons.
The inserted music is : Nocturno Opus N°2 - Frederic Chopin 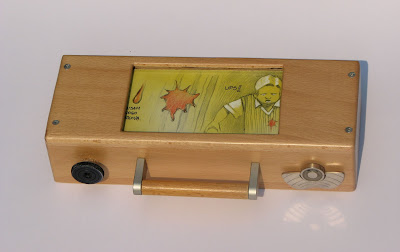